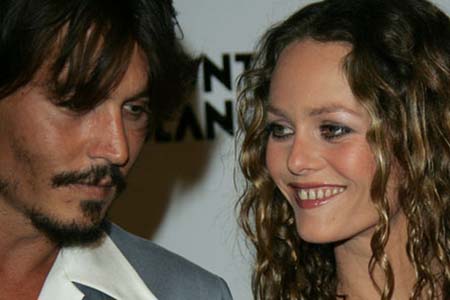 Reader Advisory:
The following is about as “People Magazine”
as you’re ever going to get from je parle américain …

You could almost hear the gasps among certain of our friends on Facebook tonight when the news hit that French model and music star Vanessa Paradis and her partner, American film superstar Johnny Depp, were splitting up. Before tonight, I dare say that many of my friends back in the States would’ve been hard pressed to even come up with “Mrs. Depp”‘s name, but she’s a veritable institution here in France, and her Bohemian love story and family life with Johnny were almost legend.

Johnny and Vanessa’s love story started in Paris back in 1998, when Johnny noticed Vanessa across the bar of the Costes Hotel in Paris. According a People Magazine piece from 1999, Vanessa told her friend and biographer Alain Grasset that she “spotted [Johnny] pretty soon after he noticed her” and the two “were exchanging secret glances. When he invited her to his table, he made a place for her to sit down and … she went straight for it.” They spent a few hours talking, there were fireworks, and the rest is history.

Romantic huh? Maybe it reminds you of another story you’ve heard? About glances across a crowded bar and the beginning of an international love story? Yeah? No? Maybe? Okay, click here for a reminder. Michel and I used to joke about Vanessa and Johnny being our “celebrity couple analogs” … or, as I like to describe it, “Sultry French singer meets devastatingly handsome American.” Okay, so maybe the analogy isn’t spot on, but it’s good for a chuckle over drinks with friends … or for the hook of a blog post. Ahem. So, getting back to the story at hand …

Johnny and Vanessa went on to build a family together. They have a daughter Lily-Rose, 13, and a son Jack, 10, and the family seemed to lead a happy life together in the southern French hamlet of Plan-de-la-Tour. In a recent interview with French magazine VSD, Johnny said that living in Provence with Vanessa and the kids had given him everything he wanted: “A marvelous family and also an equilibrium which [he] missed enormously.” Nevertheless, by all accounts, things started to go downhill for the couple after they moved to Los Angeles. It was rumored by insiders close to the couple that the relationship was all but officially over earlier this year, but Johnny maintained as recently as May that the couple was not on the rocks.

Today, alas, it is official. The couple’s publicist says that the break-up is amicable, but that doesn’t make it any less sad for those of us who are fans of the former Franco-American couple.

On the bright side — as Michel joked on his Facebook page this evening — this just means that, henceforth, the most glamorous Franco-American couple will be … us. Okay, so I never said we weren’t a bit delusional.

2 thoughts on “Vanessa and Johnny?!”