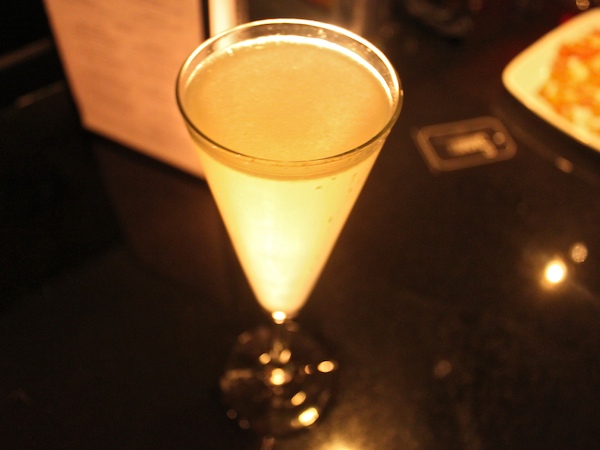 So, judging by the traffic on the Facebook pages of my friends back in the United States, the French 75 is all the rage these days. I can understand why. This classic concoction of gin, simple syrup, lemon juice, and champagne is quite refreshing on a hot summer day—the perfect elixir against the oppressive heat currently smothering South Carolina or DC, where most of my American family and friends live.

Interestingly, this cocktail was created at the New York Bar in Paris back in 1915 by the barman Harry MacElhone (who later acquired the New York Bar and changed its name to Harry’s New York Bar). I say that this is interesting, not because I happen to be in Paris while this drink is apparently undergoing a renaissance in America, but because my perception of Harry’s New York Bar was soured during my first and last visit there on July 4. (You can read about why here.) I swore off Harry’s after that, but maybe I owe it to myself—and to my friends who are French 75 fanatics—to go back at least once more to imbibe this classic in the very place of its birth. And maybe this time, the waiter will actually know what I’m ordering.

The “French 75” or “75 Cocktail” (or “Soixante Quinze,” if you order it in French) was named after the French 75-mm howitzer artillery piece used during the First World War, reportedly because the drink had such a kick that you felt like you’d been shelled by a “French 75.”

In The Stork Club Bar Book, American writer and food critic Lucius Beebe (who had a column in Gourmet magazine and also wrote for Playboy and the American travel magazine Holiday) later wrote that “… if [the French 75] did not actually have its origin in the first of the German wars, [it] at least came to the general attention of American drinkers at that time and was immediately enshrined in the pharmacopoeia of alcohol artistry in the United States upon the conclusion of hostilities in 1919.”

The recipe was first recorded in 1930 in The Savoy Cocktail Book, where celebrated barman Harry Craddock wrote that it “hits with remarkable precision.” Here you have it, straight from the bar manual of that London establishment where Mr. Craddock fled to continue practicing his art after Prohibition dried things up in the United States:

Combine the ingredients in a shaker with crushed ice, shake vigorously and pour into a highball or Collins glass. Top with brut champagne.

There are numerous variations on the Savoy version. For example, the Esquire recipe calls for 1 teaspoon of superfine sugar (that’s one-third of a tablespoon), only 1/2 ounce of lemon juice, and exacting 5 ounces of champagne, and the Gourmet recipe from 1960 calls for the juice of half a lemon and just a meager teaspoon of simple syrup.

Of course, the best part of making a cocktail is drinking it, so it needs to be mixed to your taste. Personally, I like my drinks a little on the sweeter side (despite the fact that it can make a hangover even worse), so I’ll stick to the Savoy version with a more liberal interpretation of that “spoonful” of sugar.