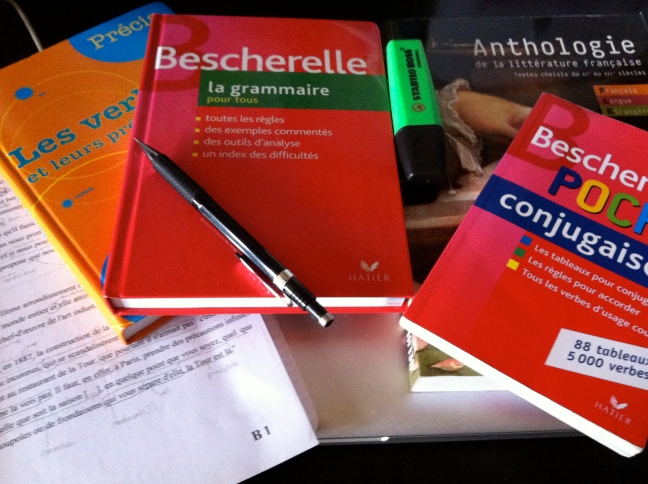 If you know me well, you know that I’ve spent a heck of a lot of time learning things that I haven’t necessarily parlayed into gainful employment. I graduated from a high school specializing in science and math, but I didn’t become a scientist or a mathematician. Then I went off to college to study architecture, but didn’t become an architect. In fact, I changed my major to political science, but I didn’t become a political scientist either — even after following up with a degree in foreign affairs. Instead, I ended up working as the marketing director for — of all things — a professional society of pension actuaries! I guess the only time I’ve actually put all that book-learnin’ to practical use was after law school when I became a lawyer for seven years. Thank goodness for that, too, because my savings from that time in my life helped me move to France without a job and start a new chapter here as … <drumroll> …

This time, for obvious reasons, I became a student of French. After all, when I moved to France in 2010, I only remembered a smattering of the French I’d studied two decades earlier in high school. Initially, I anticipated a year of French courses and then, of course, I’d be gainfully employed in France doing … something. It hasn’t quite worked out that way, though. I even got certified to teach English back in March, but I’m still looking for what I’ve started to describe as “the ever-elusive teaching gig.” As a non-EU citizen, I need to find an employer who’s willing to sponsor me for a work visa, but no one wants to jump through the hoops of French bureaucracy when a qualified EU citizen can do the job just as well. Another option is to become an independent contractor, but that involves a complicated process that isn’t guaranteed a positive resolution. I’m keeping all options on the table, though. In any case, don’t worry about me too much. I do have a few irons in the fire at the moment, so keep your fingers crossed.

In the meantime, of course, I have to renew my residency permit every year, and the easiest way to do that is just to go back to school. So, last Thursday, I showed up for yet another semester of French grammar, literature, phonetics, and cultural seminars at the Cours de Civilisation Française de la Sorbonne. Now, I really can’t complain about being in school again; I actually do enjoy it. It’s invigorating and rejuvenating to be back in a classroom with students from countries as disparate as Japan, Ukraine, and Brazil, most of which are young enough to be my kids. I’m very pleased, as well, to have the same professor I had for the last two semesters at CCFS. He’s a real linguist and, like me, he enjoys sharing the intriguing history of how we ended up saying things the way we say them. I’m also looking forward to my seminars this time around: “The History of Paris from its Origins to the French Revolution,” where I’ll delve once again into one of my favorite subjects, and “French Cinema,” where I’ll (presumably) spend an hour a week watching classic French movies. Not bad, huh? The only part I’m not really looking forward to is my phonetics class. I mean, there really is nothing more torturous than spending five hours every other week listening to your own voice repeating French sentences over … and over … and over. Well, the fourth time around, my accent has to have gotten better, right?

“Fourth time around?” you ask. Yes, this will be my fourth semester at this fine institution — the third time at the same level (niveau supérieur). CCFS doesn’t seem to have any qualms about letting me come back again and again, and neither does the prefecture … at least for the moment. Nevertheless, CCFS isn’t the cheapest school in Paris, and I simply can’t afford to do it again. To renew my residency permit, though, I have to enroll for two semesters each academic year so, on November 12, I’m planning to enroll at Université Sorbonne Nouvelle — Paris 3 for the spring semester. Hopefully I’ll place into their highest level and graduate in May with a diploma that will help me … get into another French university where I can study … Anglo-Norman and French medieval history?

Yeah, I need to win the lottery.