This post isn’t to announce that I’m quitting Paris to go to school in Dublin. Don’t worry: I won’t be changing the name of the blog anytime soon. Instead, this is about the building right here in Paris where I currently have my French classes.

I’ve been studying French here for a while now, but this is the first semester my classes have been at the Centre Culturel Irlandais (“Irish Cultural Centre”). I was vaguely aware of the Centre’s existence before October, but I never really knew anything about the place.

“Irish Cultural Centre, huh? That’s different,” I thought. “Meh … a cultural center for Irish folks in Paris. They’ve probably got one of those for every cultural group around.”

Since October, though, I’ve learned that the Centre is a lot more interesting than I originally thought. Since opening its doors in 2002, the Centre has been dedicated to promoting Irish culture in Paris; it serves as a home and workshop for up to 45 students, researchers, and artists engaged in work relating to Ireland or Irish culture. In addition to hosting events throughout the year, the Centre also offers courses in Irish language and contemporary Irish history and culture. If learning Gaelic isn’t quite your thing, you can still stop by to see the free art exhibitions, or visit the Centre’s library (the “mediathèque“) and the exquisite eighteenth-century chapel: Saint Patrick’s. In addition to the médiathèque, there’s also the “Old Library,” which houses over 8,000 works (over half of which were written or published between the 15th and 19th centuries, including three highly-treasured illuminated manuscripts dating from about 1500). The Centre also has a women’s chamber choir that periodically performs concerts of Renaissance and Baroque pieces in the chapel. You can always just wander into the Centre, but the best way to plan your visit is to check the calendar of events on the Centre’s website; most events and exhibitions are free, but some (like a visit to the Old Library) still require reservations.

Now, as a remote descendant of the Irish diaspora in America, I was certainly attracted to the Centre’s current mission to promote Irish culture, but the historian in me was even more curious about the Centre’s past … especially after I learned that it stretches back over 400 years!  The Centre, you see, is located on the grounds of an historic site with a very interesting story:

The “Collège des Irlandais”
(“College of the Irish” or “Irish College”)

“Hm. That’s interesting,” I thought. “But what exactly is the ‘Irish College’? … And why in the world is it in Paris of all places?”

As it turns out, the “Irish College” of Paris was just one (although a very important one) of 34 such “Irish Colleges” established throughout western and central Europe during the 16th, 17th, and 18th centuries as seminaries for Irish Catholic priests. The imposition of Penal Laws against Catholics in Ireland made it impossible for aspiring priests to receive eccelestical education there, so they were forced to establish seminaries abroad. The Irish College of Paris can trace its origins to 1578 when one such Irish priest formed the “Community of Irish Students in Paris” at the Sorbonne. By 1624, the growing community had been officially recognized as a seminary and, in 1677, it was granted ownership of the Collège des Lombards (formerly an Italian institution that had fallen into disrepair). In 1775, the seminary acquired the building that now houses the Centre Culturel Irlandais, and this new site became known as the Collège des Irlandais. The Irish College survived the anticlericalism of the ensuing French Revolution, but it lost much of its property and it never would regain the position of importance it had during its first two centuries. Changes in Ireland had resulted in the establishment of a Catholic seminary in that country in 1795, effectively ending the necessity for Irish seminarians to go abroad for their education. Nevertheless, the Irish College remained open, serving as an Irish seminary for most of the next two hundred years, but also as a hospital during the Franco-Prussian War of 1870-71, an American Army refugee center in 1945, and a Polish seminary during the post-World War II years. Renovations on the building began in 1997, and the new Centre Culturel Irlandais opened its doors on the rue des Irlandais in 2002.

If you’d like to know a little more about the history of the Irish Colleges in general — and the Irish College of Paris in particular — click here for another article on je parle américain providing more detail.

If you happen to be in the Latin Quarter and you want to take a little side-trip off the beaten path, drop by the Centre Culturel Irlandais. The Centre’s exhibitions and library are open daily from 2 pm to 6 pm (8 pm on Wednesdays). Exhibitions are also open from 12:30 pm to 2:30 pm on Sundays. The Centre is located at 5 rue des Irlandais in the 5th arrondissement.

In the meantime, check out this gallery of images from the Centre. Just click on any image, and you can scroll through the entire gallery. To exit, click in the black area outside of the image you’re viewing. 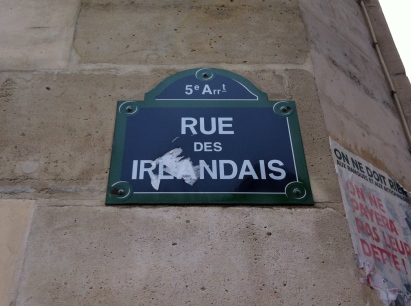 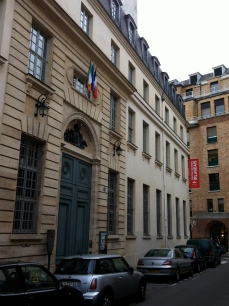 The City of Paris’s historical marker 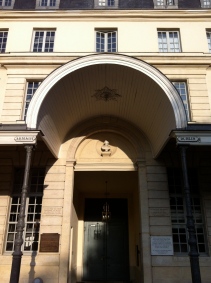 The entrance, view from the courtyard

The Irish College, view from the courtyard

The Irish College, view from the courtyard 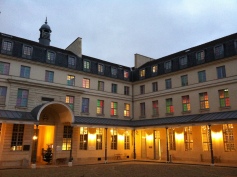 The Irish College, with a subtle window display for the Christmas season

The stairwell to my classroom 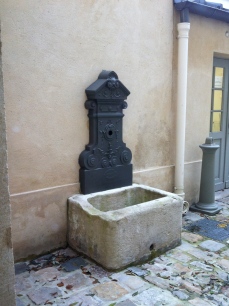 The old, beside the new

Studios for artists in residence 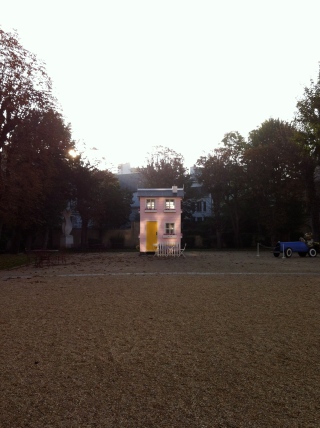 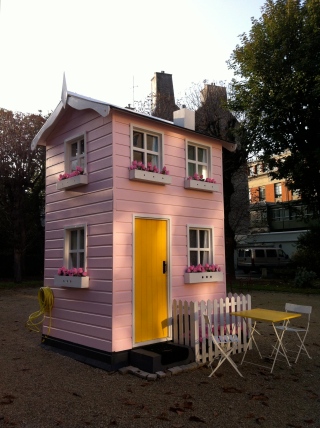 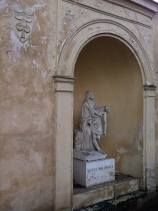 The pietà in the courtyard

The pietà in the courtyard

The altar of Saint Patrick’s Chapel 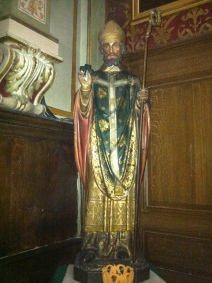 The “médiathèque” (the library) 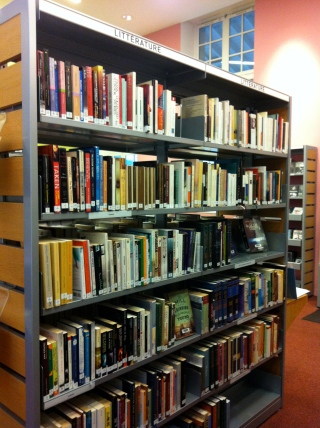 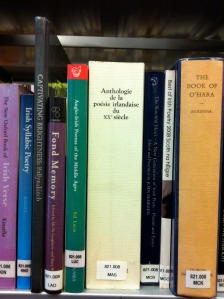 An anthology of 20th century Irish poetry (in French) 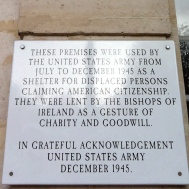 Plaque expressing the gratitude of the American Army, 1945 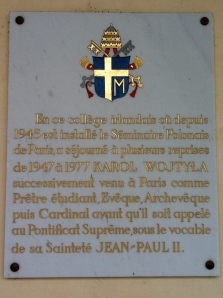