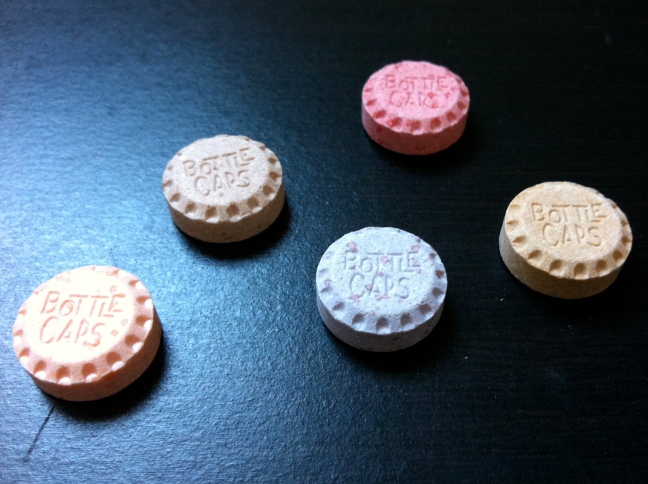 Saturday evening, we went to a little Christmas party with friends, which featured a “White Elephant” gift exchange. Just like last year, we each had to bring a gift that cost less than 5€. Michel and I ended up with a set of six “tapas glasses” — which we’re going to use as lowball glasses — and a box of … 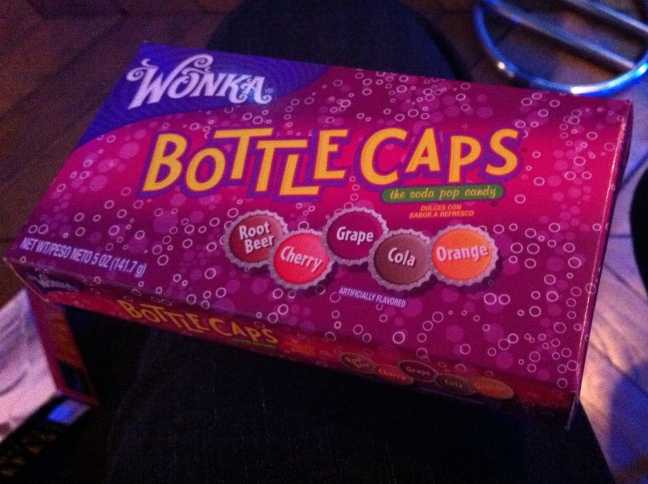 Remember these from your childhood? One of our friends found them at a specialty shop here in Paris. After the import taxes, the price of that 5-ounce box was probably dangerously close to 5€.

It was actually Michel who got the Bottle Caps, but I forced him to trade with me. After all, Michel just doesn’t appreciate the full panoply of candy like I do. You know … he’s French, so candy ought to have chocolate in it, or at least some caramel. A bonbon made of dextrose with artificial flavors simply makes no sense to him.

Everyone was intrigued by the Bottle Caps, so I was thrilled to effect a cultural exchange. The reaction was just as I expected:

Bingo!
Welcome to the world of American candy.

And then came the discovery of the day:

French people do not like the taste of root beer.*

As you might know, Bottle Caps come in five soda-pop flavors: orange, cola, grape, cherry, and root beer. When our friend Rose was lucky enough to get a root beer Bottle Cap, a look of mild repulsion came over her face.

“Does it taste kind of like herbs and spices? That’s root beer.”

Confusion abounds …
… and understandably so. After all, we did name it “root BEER.”**

Posting about my discovery on Facebook elicited a flurry of responses, including a few from American (and English and German) detractors of root beer who wanted to express solidarity with their French counterparts. Obviously, sassafras, horehound, and birch are, shall we say, “special” ingredients but why, I wondered, do French people not like those herby, barky, rooty flavors? After all, as another friend pointed out on my Facebook post, they do just fine with Ricard or Pernod. Michel’s reaction was perhaps the most informative of the evening:

“It reminds me of the dentist. It’s not a good association.”

That reminded me of another discovery I made several months ago during one of my French classes. We read an article about the senses of taste and smell, how they develop during early childhood, and how they’re strongly linked to the memory center of the brain. The article also touched on cultural differences — how certain flavors and scents can elicit drastically different reactions around the globe. We learned, for example, that Southern Europeans don’t like cinnamon as much as Northern Europeans and Americans, that butter is highly appreciated in India and Tibet but not all in Japan, and that the taste of cloves, while very popular among Northern Europeans and Americans, is slightly repugnant to the French because … it reminds them of the dentist’s chair.

Which raises the question: Why do French dentists take perfectly delicious flavors and ruin them for an entire nation by forever associating them with periodontal work?! Oh well, I guess my plan to open an A&W café serving purple Brach’s spice drops as after-beverage “mints” is destined for bankruptcy.

Another Facebook friend noted, though, that while the French distaste for root beer seems almost universal, if you make them root beer floats without disclosing the ingredients, they like it just fine. Sounds very français, as a matter of fact: A touch of dairy makes anything better! Hmm …

*This is a gross generalization that has not been substantiated by an independent study.

**As a matter of fact, when root beer was first brewed in America in the 18th century, it was a lightly alcoholic beverage.

4 thoughts on “Cream soda, anyone?”