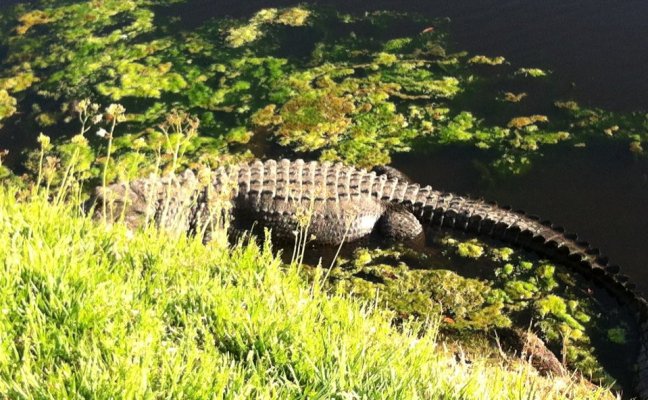 Part of the attraction of “America” for some French people, I think, is the image of the cowboy as an American stereotype. Now, I’m certainly no Marlboro Man and I’d say I’m prone to being booted out of most roadhouses, but I have been on a horse, I have country line danced, and I do walk with a certain thumb-in-pocket swagger, even on the cobblestones of Paris. Growing up in the Deep South — in the country — and speaking with a certain drawl about subjects like hunting, tractors, and country-western music give me a certain “cowboy credibility” here … even though I’m a vegetarian, I’ve only shot my father’s rifle a handful of times, and the most farm work I’ve ever done was picking beans in my parents’ garden. Nevertheless, if they want to see me as a cowboy, I’m more than happy to oblige.

Last week, when I was in South Carolina, my parents and I traveled down to Hilton Head to visit my aunt and uncle. Now, we all know that Hilton Head is not exactly the Okefenokee, but I knew there’d be alligators there and I was anxious to snap a few good shots to impress Michel, who was back in France. The evening after we arrived, my uncle and I went out searching for alligators in the neighborhood and just when we thought there were none to be found, we happened upon a big daddy gator sunning himself on the bank of a pond. Like an American Crocodile Dundee, I sprang into action … END_OF_DOCUMENT_TOKEN_TO_BE_REPLACED