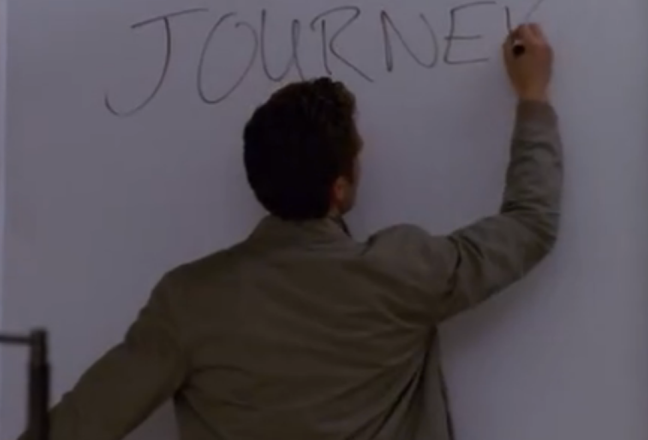 Today, I watched the season one finale of Glee. As you probably all know, Glee is a musical comedy television show about a fictional high school glee club in small-town Ohio. I’ll admit it — I’m a fan. It’s kitschy and the music is almost always top notch — especially when Mercedes is belting it out. Anyway, during the season finale, the glee club ended up choosing a medley of Journey songs for their number at the Midwest regional competition. Here’s how they opened their performance:

They closed with “Don’t Stop Believin'” — of course. It was their anthem, after all. (Unfortunately, I couldn’t find a good YouTube clip of that part of the performance.) Anyway …”What,” I’m sure you’re wondering, “besides being such a Glee fan that I’m paying homage to it on my blog, makes me such a nerd?”  Well, as soon as I saw Will Schuester write the word “JOURNEY” on his big flipchart in the rehearsal room at the beginning of that episode, two things immediately came to mind: END_OF_DOCUMENT_TOKEN_TO_BE_REPLACED