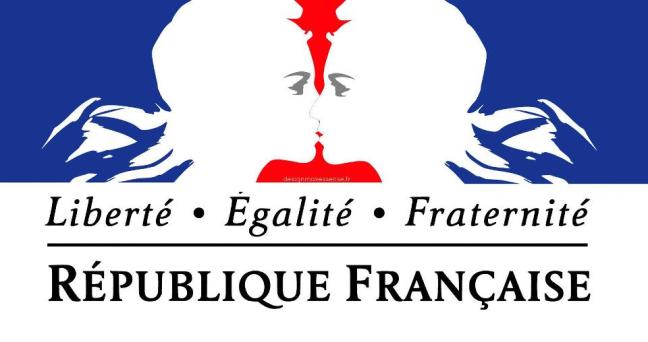 It’s been a big weekend for civil rights here in France. If you’ve followed our news lately, you’re certainly familiar with the movement known as “Mariage pour tous” (“Marriage for All”). It’s the popular name for a legislative initiative to open marriage to same-sex couples and extend adoption rights to us. After months of vigorous debate and sometimes violent opposition, it was adopted this spring by the National Assembly and the Senate. Opponents immediately challenged the law’s constitutionality before the French Constitutional Council — the equivalent of the Supreme Court in the United States — and we waited for the ruling with a mix of hope and anxiety. END_OF_DOCUMENT_TOKEN_TO_BE_REPLACED 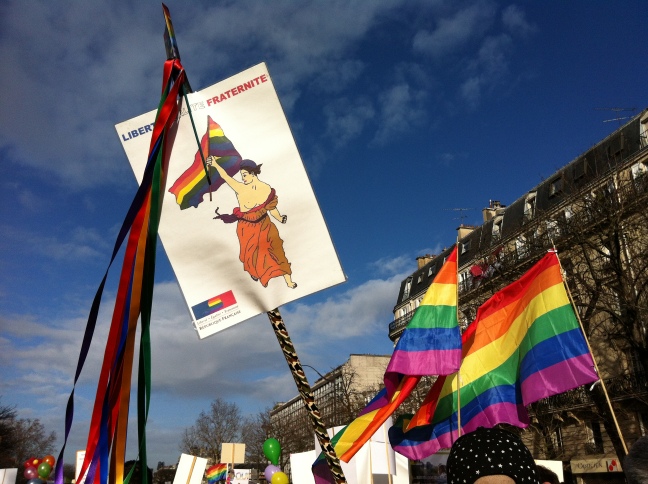 The moment is finally here. This week, the French National Assembly started debate on proposed legislation that would, among other things, finally extend marriage and adoption rights to same-sex couples. That’s why another demonstration for equality was organized for Sunday afternoon, in the wake of January 13’s demonstration against it. END_OF_DOCUMENT_TOKEN_TO_BE_REPLACED 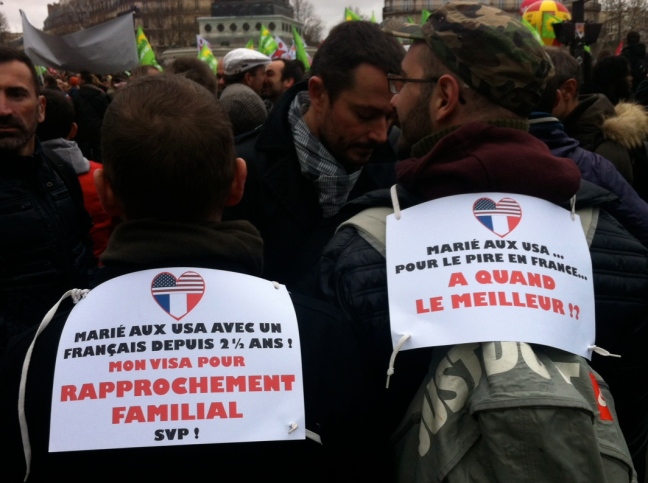 Sunday, December 16 was a big day in the streets of Paris.
It was the day of …

About a month ago, I posted an article here about the current debate in France over marriage equality and other family rights for LGBT persons. The government of President François Hollande had just announced a proposed law that would open civil marriage to same-sex couples, and the reaction was quick and malicious. Less than two weeks after the announcement, the opposition took to the streets in Paris and other French cities and — spouting blatant lies and disgusting innuendo about people like me — made their minority view very much heard. The demonstration in Paris even turned physically violent in the face of counter-protest. It was enough to sadden us and anger us … but it was also enough to motivate us to take to the streets ourselves on Sunday afternoon to make our voices heard. END_OF_DOCUMENT_TOKEN_TO_BE_REPLACED

We just experienced a disturbing weekend here in France. I didn’t see anything negative firsthand but, despite being insulated in my bubble with Michel, I was well aware that forces were mobilizing against us. Both Saturday and Sunday, opponents of marriage equality — ginned up primarily by the Vatican and its conservative allies in France — took to the streets of Paris and several other cities to demonstrate against proposed laws that would grant marriage and adoption rights to same-sex couples. If enacted, these laws will finally bring France in line with other Western European democracies like Norway, Sweden, Denmark, Iceland, the Netherlands, Belgium, Spain, and Portugal. If defeated, same-sex couples in France will remain second-class citizens in their own country.

To be honest, it’s been difficult to follow the news since Saturday; I even get anxious when Michel brings the subject up or when I see something about it in my Facebook newsfeed. END_OF_DOCUMENT_TOKEN_TO_BE_REPLACED