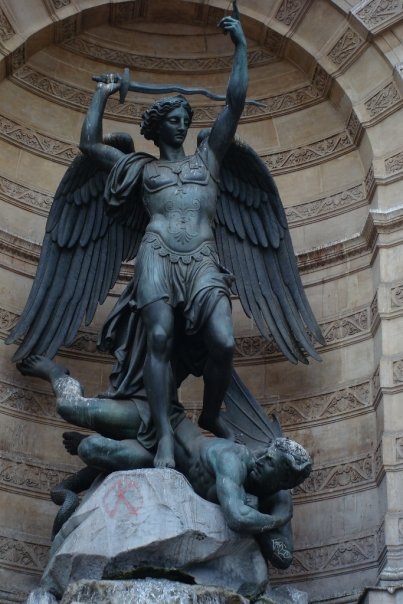 Today was September 29: Michaelmas, or the Feast of Saint Michael. In America, we don’t generally make a big deal about the feast days of saints. There are exceptions, of course, the most well-known in America being Saint Patrick’s Day, when we wear green and get drunk, all while pretending to be Irish … and perhaps the Feast of Saint Francis, when you might take your pooch to church for a blessing even if you haven’t darkened the church door for a few months. It was not until I met my French husband, though, that  I realized how feast days are still very current in the French consciousness, even if they have largely—if not entirely—lost their religious connotation. As soon I had a few French friends on Facebook, I started to see “bonne fête” popping up in my newsfeed—not thanking someone for a great party the night before, but sending good wishes on the feast day of the Saint that bears his or her name. It’s a nice tradition, and one that I’ve adopted with my French family and friends.

Fête is actually one of my favorite French words and also one of my favorite English ones, not just for what it means but for its etymology. In French, fête means “a day dedicated to a saint” but also more generally “a celebration” and fêter, the verb, means to celebrate in grand form. We have adopted the secular sense of the word directly into English (without the accent) to mean “a lavish, often outdoor party” or as a verb meaning “to honor or commemorate with a fete” or “to pay high honor to.” While the first recorded instance of fete being used in English wasn’t until the 15th Century (a direct import from Middle French), related words like “feast” and “festival” and “festivity” evolved from an Old French root, planted in England by the Normans four hundred years earlier.

So, how are Michael and Michel celebrating the Feast of Saint Michael while they’re in America? With a giant barbecue feast, of course … Michaelmas South Carolina style!