The United States and France have a long relationship, and like all relationships, ours has had its ups and downs. Born during our Revolution, Franco-American friendship is, of course, the complex product of our two countries’ unique histories and the moments when our paths have crossed — moments when we have shared the same struggle and the same vision of the way the world should be.

Perhaps no moment in our shared history demonstrates the strength of our friendship and common cause more so than D-Day, June 6, 1944 — when 73,000 Americans, 61,715 British, and 21,400 Canadians landed on the coast of Normandy to begin the liberation of France from Nazi occupation. That operation, codenamed “Neptune,” was the largest amphibious assault in history, and formed the spearhead of “Operation Overlord,” the military operation to liberate northern France. The D-Day operation has been memorialized in our history books, in stories handed down from veterans to their children and their grandchildren and, of course, in our popular culture. It was not only an effort by American, British, and Canadian forces to liberate occupied France, however, but one closely coordinated with the French Resistance, whose support on the ground was indispensable to the operation’s success.

French Resistance efforts leading up to and during the D-Day landings included four major operations: Plan Vert (“Plan Green”), to sabotage railways prior to the landings; Plan Bleu (“Plan Blue”), to destroy electrical facilities; Plan Violet (“Plan Violet”), to cut underground communication cables; and Plan Tortue (“Plan Turtle”), to delay German reinforcements headed to Normandy after the landings. In the days leading up to the invasion, the BBC’s French language service alerted the French Resistance to initiate their operations by broadcasting coded messages. Some messages were as banal as “Les carottes sont cuites” (“The carrots are cooked”) and “Les dés sont jetés” (“The dice are thrown”); others were as poetic as these lines from Verlaine’s Chanson d’automne : “Les sanglots longs des violons de l’automne / Bercent mon cœur d’une langueur monotone” (“The long sobs of autumn violins / Lull my heart with a monotonous languor”). French resistants, listening attentively from their locations all over occupied France, sprang into action when the call came. On the day of the landings, they destroyed 52 locomotives and cut railway lines in more than 500 locations throughout France, leaving German forces in Normandy completely isolated. Although German reserve units were eventually able to reach the front in Normandy, the Resistance delayed their arrival by as much as two weeks. (Continued after the gallery.) 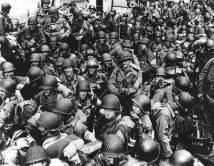 Troops preparing for the Channel crossing to Normandy, June 6, 1944.

A convoy of infantry landing craft sails across the English Channel toward Normandy, June 6, 1944. Each landing craft is towing a barrage balloon for protection against low-flying German aircraft.

Troops and crewmen aboard a LCVP (Landing Craft, Vehicle, Personnel) as it approaches a Normandy beach, June 6, 1944. 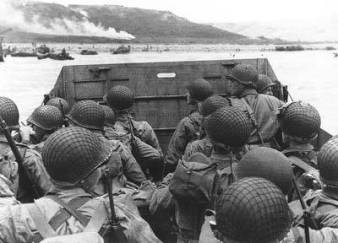 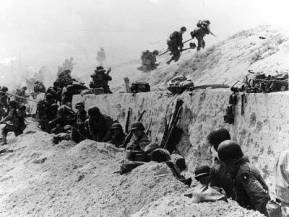 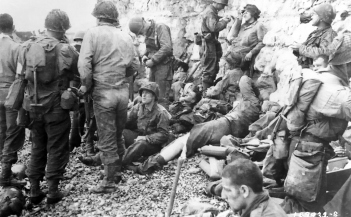 Francs-tireurs of the French Resistance and American paratroopers, Normandy, June 1944.

The liberation of Cherbourg, Normandy, June 1944. 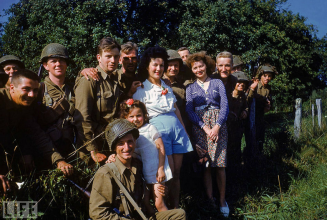 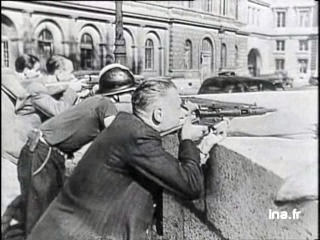 •
During June and July, the Allied forces established a beachhead in Normandy where they assembled some 1,500,000 troops. It was not until July 25, however, that the Allied forces launched Operation Cobra, which finally broke through the German lines in Normandy. After that operation, the Allied advance on Paris was extraordinarily rapid. When they crossed the Seine on August 19, the French Resistance in Paris rose up against the German garrison there. Five days later, the 2nd French Armored Division swept into Paris from the west, followed by the 4th U.S. Infantry Division, which swept in from the east. The next day, August 25, the Germans surrendered the city. Of course, the war was far from over, and France was far from being free, but the victorious celebration of the liberation of Paris marked the end of Operation Overlord, which had begun some two and half months earlier.

Today, let us take a moment to remember the ultimate sacrifice made by so many on the beaches and in the hedgerows of Normandy that rainy June 68 years ago, so that the liberation of France might finally begin.

You are about to embark upon the Great Crusade, toward which we have striven these many months. The eyes of the world are upon you. The hopes and prayers of liberty-loving people everywhere march with you. In company with our brave Allies and brothers-in-arms on other Fronts, you will bring about the destruction of the German war machine, the elimination of Nazi tyranny over the oppressed peoples of Europe, and security for ourselves in a free world.

Related: The Thin, Wet Line of Khaki (article and photos from the Normandy American Cemetery and Memorial)

P.S. — I’d like to share the article of a fellow blogger, who herself shared a letter between her French mother and her son in which her mother recounts her recollection of occupation and liberation. I highly recommend that you read this for an idea of what it was like for the French to suffer through those years and finally see the liberation of their country: Lest we forget.

12 thoughts on “A Day to Remember”