Chapter 3 of
My Life as an English Teacher in France

A few weeks ago, we commemorated the 70th anniversary of the D-Day landings. I decided not to write a new article about that momentous day; instead, I shared two earlier articles about the history of the landings and about my first visit to Omaha Beach. Normally, that would have been the end of je parle américain‘s D-Day commemoration, but something subsequently happened at work that I need to share …

First of all, let me put it out on the table: being an American in France doesn’t always ensure a warm welcome. Without getting into a protracted discussion of the complexities of Franco-American relations, suffice it to say that if America and France were on Facebook, our relationship status would certainly be set to “It’s complicated.” Like many strong relationships, there’s a certain love-hate dynamic there, and the reasons for that are entirely legitimate. What that means, though, is that being an American in France can bring with it fascination and appreciation as well as resentment and distrust, sometimes from the very same people in different contexts. So, when there are moments of genuine good feeling, I revel in them.

On the morning of June 6, I had a lesson with Jérome*, one of my clients, the one you probably remember from the misdirected SMS story. When he arrived, smiling as usual, I asked him how he was and he said that, not only was he doing well, but he was proud to have his lesson with an American that day! It was a really nice thing to hear, and I was touched by his declaration. We ended up spending our first half-hour talking about D-Day, in what we call in the business “free expression.” The grammar could wait. 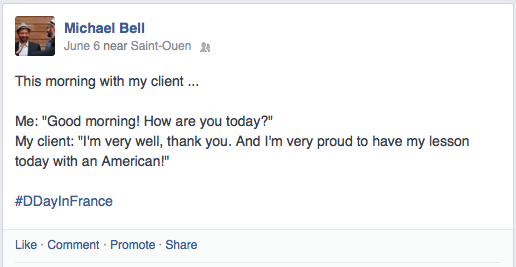 The weekend after June 6 was a long weekend in France and Jérôme, like many French, took advantage of it by taking to the highway. He had made plans months earlier to spend the weekend in Normandy, not realizing at the time that it was also the weekend of the D-Day anniversary. I crossed my fingers for him that the traffic wouldn’t be too bad.

Our next lesson was the following Tuesday afternoon. When he arrived at our office, I asked him how his weekend had been. He told me all about it: about how lucky they had been with the traffic, about how much fun he and the family had had at the beach, and then he started rummaging around in his bag. “It’s not really a present … but I have something for you,” he said. “Hmm, Teurgoule? Cider? A bottle of Calvados?” My mind started to wander through the list of typically Norman fare. When he pulled his hand from his bag and offered me a round, gray object about the size of a baseball, I wasn’t quite sure what to think …

… and then he continued his story.

One afternoon, he and his two-year-old son Kevin* were playing on the beach. He said to Kevin, “We’re having a good time on the beach today but, a long time ago, there was a war here, and the Americans came to help us. You know, my English teacher is an American, Kevin. Do you want to bring something back for him from the beach?” Kevin thought that was a really good idea, and the two of them combed the beach for a memento for me. Kevin eventually selected this particular rock as my present. “It’s a symbol,” Jérôme said.

I was really moved. At first, I was at a loss for words. I wasn’t expecting to hear something like that — something that evidently came from a place of genuine gratitude and friendship. Holding that almost perfectly round, baseball-sized rock in the palm of my hand, I thanked Jérôme and asked him to tell Kevin how happy and touched I was to receive his present.

My rock from the beaches of Normandy now sits on my desk at home, holding down a stack of work papers, Jérôme’s folder included. In the future, moments will come when I feel slighted for being “an ugly American” but, instead of getting upset, I’m going to pick up my rock and remember the moment when Jérôme gave it to me. My rock from the beaches of Normandy will sit on my desk at home, a paperweight … but so much more than a paperweight.

*Name changed to protect the innocent.

7 thoughts on “So Much More Than a Paperweight”