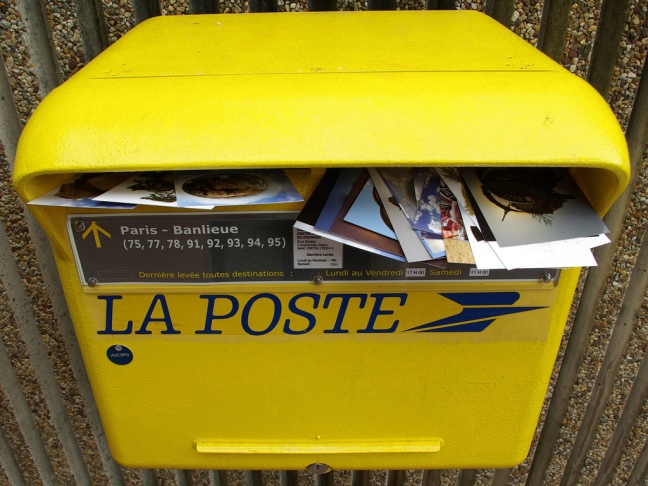 So, I just spent half an hour at the post office in La Courneuve so that I could come right back home with my letter STILL in my hand.

As is usual for this particular location of La Poste, there were only two people working (very slowly) and the line seemed to be a kilometer long. But I was patient … sort of. I assumed the requisite mindset of beaten-down resignation. Sometimes that helps. When I finally arrived at the counter after — no exaggeration — twenty-five minutes in line, I placed my fat envelope on the counter and told the postal worker that I wanted to send it by registered mail. She handed me the form for that, but then sympathetically informed me:

“But you can’t do that here. You have to use a machine for that, and it only takes change or debit cards.”

“I can do this at a machine?” I sighed. “So, I didn’t have to wait in that line after all? Okay. Well, I can pay with my debit card. It’s that machine over there?” I pointed in the general direction whence I’d come.

She kindly escorted me back over to the area of lobby with all the machines. On the way, she asked me if I hadn’t seen the “welcome desk” when I came in. 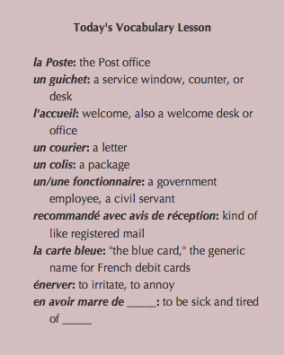 That probably sounded snarkier than I intended it to be, especially since she was being unexpectedly accommodating, but I was already annoyed from having wasted 25 minutes for no good reason.

We arrived at the welcome desk, previously empty but now occupied by a dude who looked like he was 15 years old. My escort briefly explained what I needed, and “Teen Postal Worker” swept into action, taking my envelope and putting it on the scale and selecting things on the machine’s touch screen faster than my anglophone brain could process the words.

“Okay, you can insert your card now.”

I pulled my carte bleue out of my wallet and inserted it in the card reader, waiting to be prompted for my PIN.

“Hmm. It’s not working. You can take it back out. Do you have another card?”

“There’s nothing wrong with this one. It’s new, and I used it this morning.”

I rubbed the metallic chip on the card’s face, knowing that that sometimes solves these kinds of problems. I reinserted it into the card reader, but … no luck.

“You don’t have another card?”

I was clearly grasping at straws here.

“Okay. I guess I’ll pay the fee,” I said, thinking that it would be worth the foreign transaction fee just to bring this errand to a successful conclusion.

“Well, it’s not your day.” Teen Postal Worker tried to sympathize. “It looks like the reader isn’t working. Do you have change? The machine accepts change.”

“No change?” Teen Postal Worker pressed, apparently thinking I was holding out on him … as if 3 euros and 40 cents would’ve helped.

“No,” I reiterated, a little annoyed. “I don’t have any change. I have my debit card.”

“Well, you can withdraw money right here,” he offered, pointing to an ATM in the post office lobby (yes, the post office in France also runs a bank) “and then you can get change at the counter.”

“At the counter?” I queried. “I have to get back in line to get change?”

“Yeah.” Teen Postal Worker nonchalantly replied as he turned from me and starting helping the next customer.

I looked down at the envelope in my hand. I looked over at the counter in the distance. I turned to look at the line still stretching towards the door. And then I just threw the registered mail form on the desk and walked out.

I came home all in a huff about “inefficiency this” and “sick and tired of that” and “woe is me and my life in France.” Michel calmly and coolly collected a handful of change, took my envelope, and headed back to the post office because … “he needed a walk.” (Yeah, I’ll admit it—I’m hard to handle sometimes.) He came back without the letter, so it evidently went better at La Poste for him than it had for me.

It still took him 30 minutes, though.