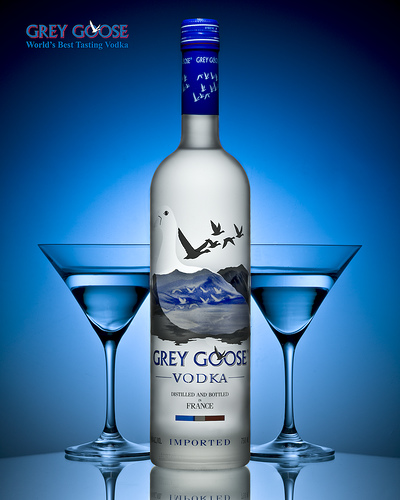 While sitting on the tarmac in Charlotte last Sunday, waiting for my return flight to France to take off, I was flipping through the pages of the duty-free magazine and I happened across an ad for Grey Goose. And I thought to myself, “Now there’s an interesting subject for my blog: the French vodka that French people don’t drink.”

You may know that Grey Goose is the second-best-selling imported vodka in the United States, and the number one super-premium vodka. But what explains Grey Goose’s success against other vodkas, including other super-premiums like the Polish Belvedere? Certainly it has to do with Grey Goose’s exceptionally smooth taste, but it also has to do with its exceptionally smooth marketing. Grey Goose has created a certain cachet that is based almost entirely on its French origins. In short …

Grey Goose is a French goose.

Grey Goose is a chic goose.

After all, in the American con-sciousness, we do associate “Frenchness” with luxury, whether it’s in the world of fashion or in the realm of food and drink. And Grey Goose’s advertising strategy certainly capitalizes on that. The frosted glass bottle features not only a flock of (presumably French) geese in flight over what must be the French Alps, but also a miniature French tricolore highlighting that what you’re about to imbibe is a “Product of France.” The flavored versions even sport French (or at least semi-French) names: L’Orange … Le Citron … La Poire … Cherry Noir. (Frankly, I’m not sure why they didn’t just call the newest flavor Cérise Noire; it’s not like cérise is any harder to understand than poire or citron.) And, of course, who doesn’t feel that much swankier while listening to French jazz …

According to the brand’s website, the story of Grey Goose “begins with the finest soft winter wheat grown by generations of farming families near the Picardy region of France. Grey Goose selects the wheat certified as Class 1 blé panifiable supérieur or ‘superior bread-making wheat’—the same wheat used to make world-renowned French bread and pastries.” (Well, if you use the same wheat they use to make a pain au chocolat, that has to be good!) To that, Grey Goose adds “only the purest water naturally filtered through Grande Champagne limestone in Gensac springs. An artesian well draws from an aquifer 500 feet beneath the ground—sourcing water untouched by humans and pollutants.” The spirit itself is distilled five times according to the time-honored traditions of the Cognac region. Impressive, huh? This process, according to Grey Goose, produces “the world’s best-tasting vodka.” While that contention is disputed by some connoisseurs and by a few taste tests (like this one and this one), there’s no doubt that Grey Goose is perched at the top of the top shelf … at least in America.

Here’s a bit of the backstory:

Grey Goose was the 1996 brainchild of New York spirits importer Sidney Frank (who made his initial fortune by buying the importation rights to Jägermeister and then marketing it to a new generation of college kids in the 1980s). Frank’s idea this time was to capitalize on the American success of the Swedish vodka brand Absolut and compete against the first super-premium vodka, Poland’s Belvedere, by going one further: production in France. He hired the maître de chai (cellar master) of a Cognac house he had previously engaged to make a brandy for export to America. Why choose France for production of a spirit otherwise associated with Russia, Poland, and Scandinavia? As Frank put it, “France has the best of everything. It’s the home of luxury. We can bottle that.” And he did.

So, with a résumé like that, why don’t the French drink Grey Goose?!

The fact is that few Frenchmen have even heard of Grey Goose. Despite being produced here, when you arrive on  Grey Goose’s website, “France” isn’t even one of the countries you can select on the dropdown menu to identify where you are. Personally, I have long suspected that Grey Goose is an inconnu here in France, but I did a little bit of research to test that assertion (and by “a little bit,” I mean almost none). After failing to find a single bottle of Grey Goose in my local supermarket (where you can find bottles of pretty much everything else), I decided to (very unscientifically) poll my French friends. I ended up with responses like these:

and the very best one …

“Ça vient de quel coin des USA?” •
“What part of the USA does that come from?“

Although Grey Goose has been available in France since 2001, it clearly hasn’t taken the French market by storm. You can sometimes find it in bars (especially those that cater to Americans) and in high-end shops like Nicolas (where you can buy it for almost $60 a bottle) and maybe at the Grande Épicerie where I once found a bottle of California springwater with a Swarovski crystal in it for something like $100 a liter. Just don’t count on picking up a bottle at the neighborhood Monoprix. Just goes to show that if you tell Americans a French backstory and set it to a jazzy French song, we’ll buy it. I guess it’s harder to sell it back to the French, though, as “that vodka you make for the Americans that they pay a lot for because French stuff is classy.”

In any case, raise your glass …

P.S.—Of course, Grey Goose is not the only French vodka on the market. Other French premium brands that have arrived in Grey Goose’s wake include Cîroc (Sean “Puffy” Combs’s vodka of choice, which is made from grapes instead of grain or potatoes) and Nuage.