One of the advantages of being a perpetual student is spring break. At my new school, we actually have two spring breaks: one this week and one at the end of April. Not a bad deal, huh? Unfortunately, because of Michel‘s schedule and our lack of disposable income at the moment, there are no exotic spring break excursions on our calendar this year. Two years ago this month, though, I took a weekend jaunt down to a beautiful spot in southwest France, which made me think, “If I can’t travel this time around, I can always remember … <sigh> …

Toulouse is situated in the Haute-Garonne department of the Midi-Pyrénées region of France, about 180 miles from the Atlantic Ocean, about 90 miles from the Mediterranean, and 360 miles from Paris. With a population of over 400,000 in the city itself and over 1.2 million in the metropolitan area, Toulouse is both the fourth-largest city and the fourth-largest metropolitan area in France, after Paris, Lyon, and Marseille. Toulouse is perhaps most famous for its role in the French aeronautics industry: it is the site of the headquarters of airplane manufacturer Airbus and the Toulouse Space Center, one of two command centers for CNES (“the NASA of France”) and the largest aerospace facility in Europe. Not surprisingly, Toulouse is also a university town, with several technology schools and research centers, as well as the world-renowned University of Toulouse, one of the oldest universities in the world. With about 125,000 students in residence, Toulouse boasts the third largest student population in France after Paris and Lyon. Based on my personal experience during that short weekend visit, I can attest to the fact that you can’t swing a baguette in Toulouse without hitting a 19-year-old college student!

Toulouse also has a long, rich history. The first settlement on the site of Toulouse dates back at least to the 8th century BC, predating even the Gauls. Seven centuries later, “Tolosa” became a bustling Roman city and remained prosperous until the barbarian invasions of the 5th century. It was the capital of the Visigoths for a short time before descending into a dark period of anarchy and conflict with Frankish invaders from the north and Arab invaders from the south. It was under the reign of Charlemagne, at the end of the 8th century, that Toulouse became part of the Kingdom of Aquitaine, a Frankish vassal state, serving as a strategic military outpost on the frontier with Muslim Spain. After successive dynastic and regional conflicts, Toulouse emerged at the end of the 9th century as the capital of an independent country—a small fraction of the former Kingdom of Aquitaine—called the County of Toulouse. The Counts of Toulouse maintained their independence for several centuries in spite of recurring regional conflicts. In the 11th century, they undertook an effort to restore or reconstruct many religious sites that had fallen into disrepair, including la Basilique Saint-Sernin, the largest romanesque church in Europe. (You can see photos of this and many other impressive landmarks in the gallery below.)

Toulouse also figured prominently in the Albigensian Crusade of the early 13th century. The Crusade was a military campaign instituted by the Vatican and prosecuted by the French crown to accomplish two goals: eliminate the Cathar heresy that had become widespread in southern France, and bring an end to Toulousain independence. The political facet of the Crusade resulted from the refusal of Raymond VI, the Count of Toulouse at the time, to assist the Church in its campaign against the Cathars, with whom he was sympathetic. To make a bloody 20-year story much shorter, the Cathars and the Counts of Toulouse lost the war. The 1229 Treaty of Paris effectively surrendered Toulouse to the French crown, established the University of Toulouse as a theological institution, and permanently instituted the Inquisition to combat heresy. (So much for thinking of the Inquisition as having been born in Spain!) The Frères prêcheurs, or the Dominican Order, which had been founded in Toulouse during the Albigensian Crusade, was tasked with spearheading the Inquisition. They initially took up residence in the breathtakingly beautiful Toulouse monastery called Les Jacobins. (You can see several photos from Les Jacobins in the gallery below.)

The history of Toulouse did not end in the 1200s, of course, but it was the end of Toulouse as a country independent of France. It’s also the period of the city’s rich history that was most evident (and most interesting) to me during my brief visit. For background on the more recent history of Toulouse, though, you can click here.

Finally, here’s the photo gallery you’ve been waiting for. You should be able to see right away why Toulouse is nicknamed “la ville rose” (“the pink city”) and why I think this post is very aptly named “Pretty in Pink” …

(The article continues after the gallery.) 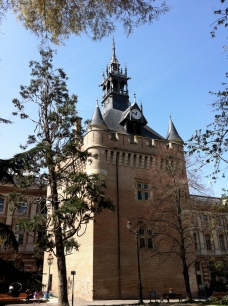 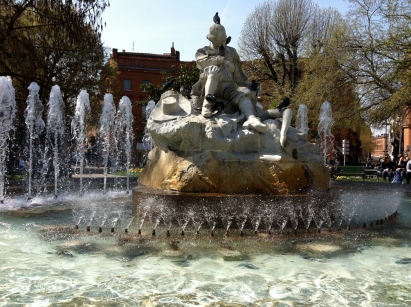 Monument to the Dead (of the First World War) 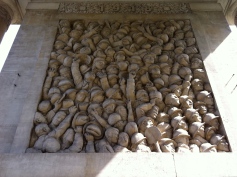 Detail from Monument to the Dead (of the First World War) 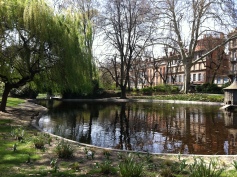 A view of the Pont Neuf (New Bridge), 16th century 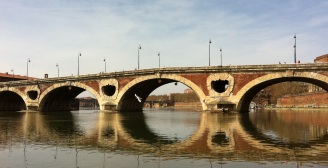 The Pont Neuf. Like the Pont Neuf in Paris, it is now the oldest bridge in town.

La Basilique St-Sernin, named after Saint Saturnin, the first bishop of Toulouse (martyred in AD 250), constructed c. 1080-1120 on the site of a 4th century basilica 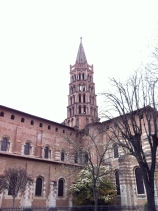 The Miègeville Door and its tympanum showing the Ascension of Jesus, La Basilique St-Sernin

The bell tower above the high altar, La Basilique St-Sernin 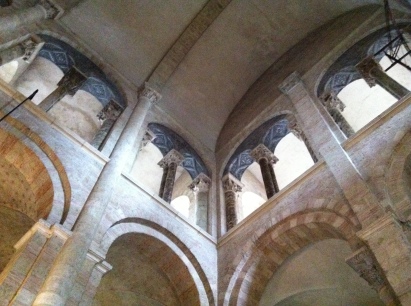 The nave and the high altar, La Basilique St-Sernin

The gallery above the nave, La Basilique St-Sernin 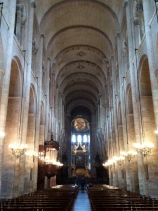 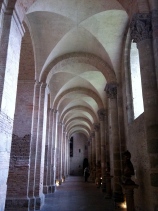 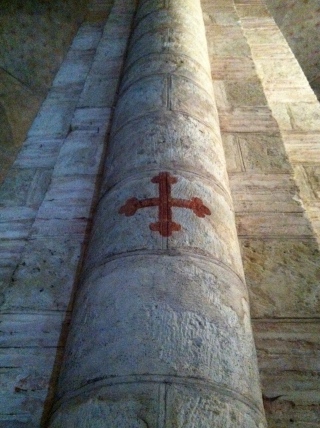 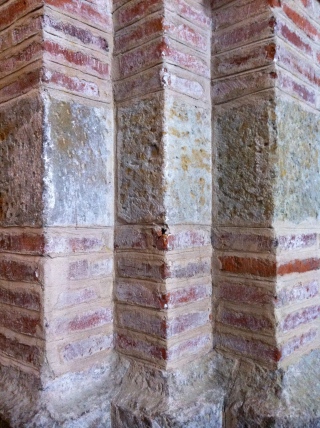 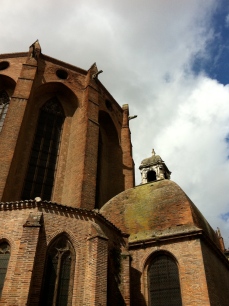 Les Jacobins, or the Convent of the Jacobins (the Order of the Brother-Preachers, the Dominican Order), 12th century

A view of Les Jacobins from its garden 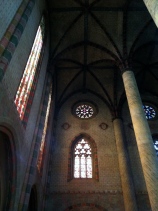 An altar in Les Jacobins 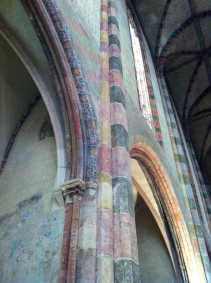 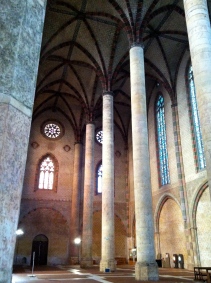 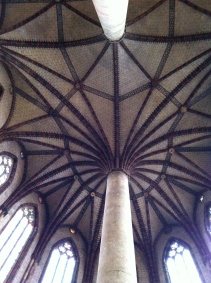 “The Palm Tree,” in Les Jacobins 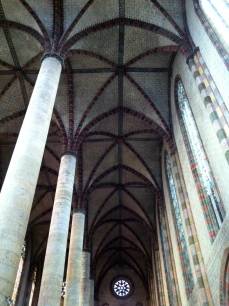 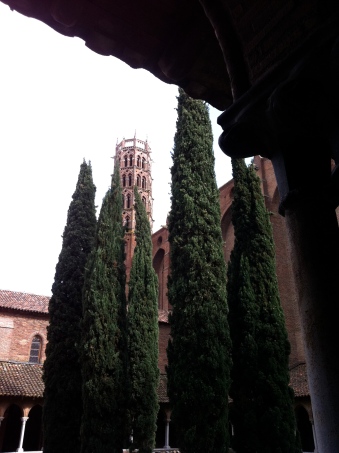 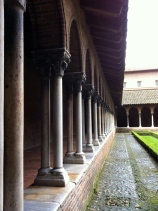 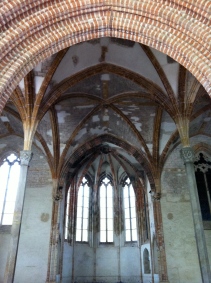 A chapel in the Cloister, Les Jacobins 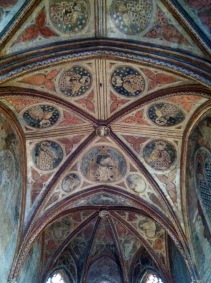 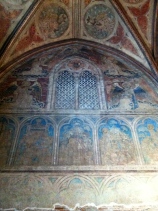 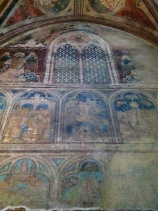 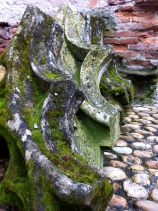 The Pont Neuf, viewed from the north 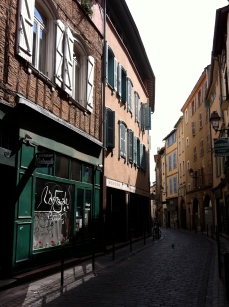 Another typical side street in “la ville rose”

La Basilique de Notre-Dame-de-la-Daurade (The Basilica of Our Lady of the Sea Bream — no joke), 18th – 19th centuries 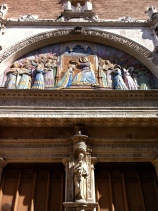 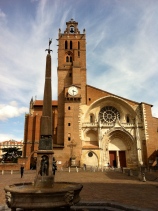 The nave of La Cathédrale St-Étienne

The Chapel of the Virgin Mary, La Cathédrale St-Étienne 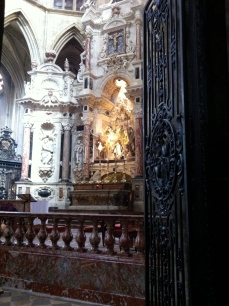 Access to Toulouse from Paris is easy. Air France operates several flights a day at very reasonable fares, and flight time is only about an hour. Transportation from the Toulouse-Blagnac Airport is quick and efficient on the regional bus/tram/subway system, Tisseo. You can get one-, two- or three-day passes at the airport to get into and around town during your stay. Once downtown, though, you’ll discover that the historic city center is quite walkable.

3 thoughts on “Pretty in Pink”