It’s time for the next “franecdote” — an interesting fact or story from “THAT year in French history“ where “THAT year” is this year minus the number of Facebook fans je parle américain has every Thursday. 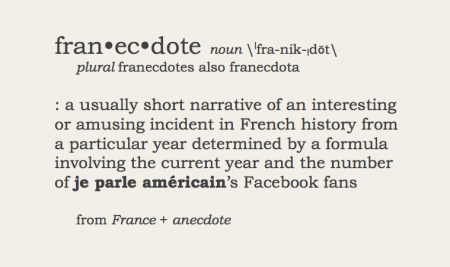 Today’s franecdote is from July 25,
when je parle américain had 332 Facebook fans.
So …

There were a lot of interesting things that happened in 1681: King Charles II of England granted a land charter to William Penn, who went on to found the colony of Pennsylvania, a woman was flogged in London for “involving herself in politics,” and the last dodo bird was killed … maybe. 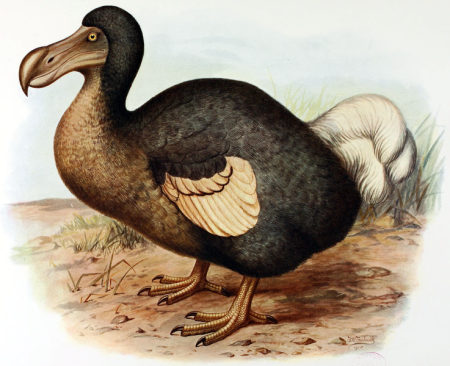 But, since this is about France, the franecdote for today is …

The Grand Opening of
The Canal Royal de Languedoc

Don’t you love how that rhymes? “The Canal Royal” … well, you have to say it in French for that to work. Anyway …

Now known as the Canal du Midi or, in the Occitan language, “Canal de las Doas Mars” (“Canal of the Two Seas”), the Canal Royal de Languedoc connects the Garonne River near Toulouse with the Étang du Thau near Sète, in southern France. It is one of the longest canals in the world at 150 miles (240 km) and, because of the terrain it traverses, it has 91 locks that ascend and descend a total of 620 feet, including an eight-lock “staircase” at Fonserannes. For comparison, the Erie Canal (which traverses New York state) is 363 miles long (584 km), but uses only 36 locks. The Suez Canal is 120 miles (193 km) long, with no locks. The Panama Canal is just 48 miles (77 km) long, with six.

Along with the Canal de Garonne, the Canal du Midi connects the Mediterranean Sea with the Atlantic Ocean. This two-canal system allowed shipping to bypass the sea-route through the Strait of Gibraltar and around Spain, an advantage that was even more important when the canal was first constructed. In the 16th and 17th centuries, such a voyage took almost a month to complete. More importantly, going through the Strait of Gibraltar subjected French shipping to attacks by the Barbary Pirates of North Africa as well as attacks from a hostile Spain. Plans for the canal were first considered as early as the reign of Francis I, who hired Leonardo da Vinci to survey a canal route from the Garonne at Toulouse to the Aude at Carcassonne. The project was abandoned, however, because of problems devising a system to supply water to the canal sections on the European continental divide.

Finally in 1662, a wealthy landowner and tax farmer from Languedoc named Pierre-Paul Riquet proposed a new plan for the canal, and it was approved by King Louis XIV in 1666 on the recommendation of a Royal Commission established to study it. Riquet’s proposal included construction of a dam to channel water to the summit sections of the canal. At the time, this dam and its reservoir — the Bassin de St. Ferréol — was the largest work of civil engineering in Europe and only the second major dam to be constructed on the continent. Construction of the canal involved over 12,000 laborers, including a thousand women laborers whose knowledge of classical hydraulics from maintaining the old Roman baths of the Pyrenees was relied upon by the military engineers overseeing the project. The canal also featured oval locks to resist collapse, a design that was considered revolutionary at the time and was later widely imitated. The canal was officially opened on May 15, 1681 some fifteen years and 15 million livres later. Monsieur Riquet unfortunately did not live to see his dream come to fruition, dying less than a year before its completion.

The Canal Royal was renamed the Canal du Midi during the French Revolution, referencing the colloquial name for southern France. While the canal was an important commercial thoroughfare for hundreds of years, its importance waned after the railway between Bordeaux and Sète opened in 1858. It has undergone a sort of cultural renaissance since 1996, however, when it was named a UNESCO World Heritage Site.

I’ve been to Toulouse, also known as “La Ville Rose” (“The Pink City”), and I’ve seen the Canal du Midi as it passes by. At the time, though, I didn’t know how important it was, so I didn’t take any photos. Maybe the next time I’m there, I’ll rectify that oversight. In the meantime, you can check out photos from Toulouse here (along with an article about the city’s history): “Pretty in Pink.”