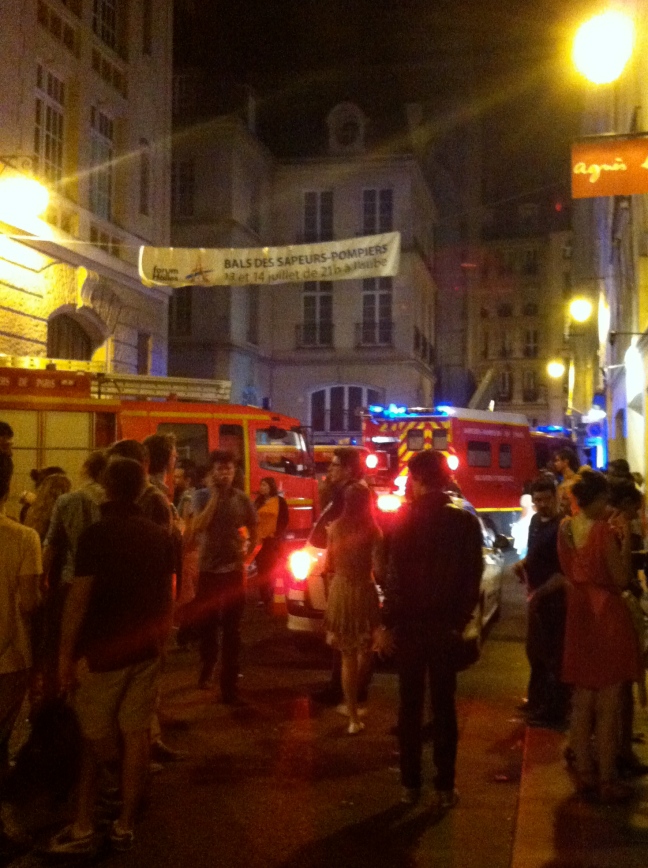 This weekend, I celebrated my fifth Bastille Day in France, and I’ve done something different every single year. Back in 2007, I was en route from Marseille to Washington after a vacation in Provence: nothing too special to report from the short layover at Charles de Gaulle. In 2009, I picnicked with Michel and his friends in the Bois de Vincennes and happened to catch a glimpse of the Eiffel Tower fireworks from the Louvre on our way home. In 2011, Michel and I trekked down to Pont des Invalides to watch the fireworks from a better vantage point. They were pretty impressive. Last year, we just stayed home … but by doing so, we got to watch from our window fireworks in four different Paris suburbs: La Courneuve, Le Bourget, Drancy, and Bobigny. This year, we kicked it up a notch. We went to my first ever …

The Firemen’s Ball — or Le Bal des Pompiers — is a veritable Parisian institution, where the fire stations of this city transform themselves into Bastille Day nightclubs. This very Parisian way of celebrating Bastille Day was reportedly born a little more than 75 years ago. According to one account, Firemen’s Balls were originally Bastille Day parties that firemen threw for themselves and their families. They featured games, theatrical and gymnastic performances, music … sometimes even the election of the fire chief. It seems that in 1937, a crowd of Bastille Day celebrants happened to pass a party that was in full-swing at the Montmartre fire station, and they knocked on the door, asking to join the festivities. It ended up being a great success and, in the years that followed, fire stations in other arrondissements opened their doors and courtyards to the public. Nowadays, the Bal des Pompiers is an event where Parisians of all walks of life come to celebrate la Fête Nationale together in fire stations throughout the city.

And they are popular! Our first destination Saturday night, la Caserne Sévigné in the fourth arrondissement, had a queue a kilometer long. It looked a bit like the ticket-holders’ line at a Justin Bieber concert, so we moved on to the next fire station on the list: la Caserne Rousseau in the first arrondissement. The line there was almost as long, but seemed to be moving quickly, so we joined the throng … 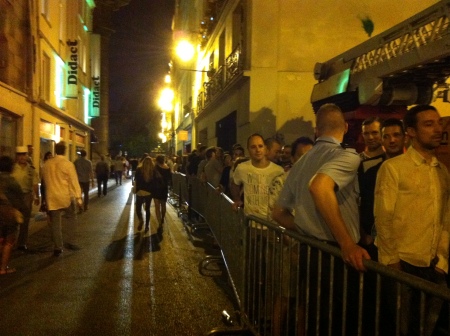 Now, I didn’t know quite what to expect from my first Firemen’s Ball. I’ll admit that when Michel first mentioned it to me, I envisioned something a bit more refined. (I wondered whether I could just wear jeans and a blazer, or if I needed a tie.) In reality, it was more like a giant frat party with a cover band than the image I had in my head. In retrospect, it’s a good thing I didn’t wear that tie — or that blazer — to this full-on French mosh pit:

My initial reaction, listening to the band’s rendition of “Proud Mary” while drinking my lukewarm Dutch Heineken was “Uh … vive la Révolution?” It didn’t seem very “French” to me, not to mention very “Bastille Day.” I did my share of dancing and singing along to ABBA, Michael Jackson, and “Maniac” from Flashdance. Oh … and Michel taught me how to cha-cha, too! The band did eventually rotate in some French tunes (most of which I didn’t know — but they were wildly popular with the crowd), and there were a few “guinguette” moments featuring an accordion for the real traditionalists.

Check out these videos from the ball:
(You can watch them in high definition
by clicking on the “gear” to change video quality.)

“Waterloo” by ABBA. I wondered if I was the only person
who saw the irony in this situation.

“Maniac” by Michael Sembello, from Flashdance

And because you haven’t had enough ABBA: “Mamma Mia”

And yes, like I said, there were French songs, too!
Charles Aznavour’s “Mes emmerdes”

It might not have been the suit and tie homage to the French Revolution that I initially expected, but it turned out to be a magic moment of pure conviviality. Everyone partied together, elbow to elbow: firemen, lawyers, students, housewives, soldiers, granddaddies … every age, every social station, every ethnicity you could see on the streets of Paris, including even middle-aged American expats like me. It’s what the French call “bon enfant” (“good child”), where it doesn’t matter who you are or what you do, just come as you are and you’re welcome. Considering that ambiance, where all the boundaries really did come down, maybe “Vive la Révolution” is right!

Finally, here’s a gallery of a few images from the Ball.
To open the gallery, simply click on one of the photos below (or on a white space if nothing appears). You will then be able then scroll through all of the photos in a larger format.

Arriving at the fire station 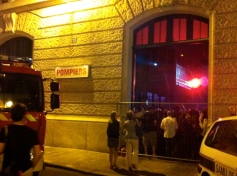 At the end of the line

The entrance. I love the blue, white, and red lights. 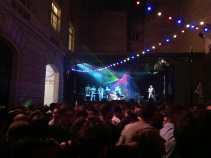 The costume changes were non-stop

He had a really good time.

Leaving the party. I hope that fire truck didn’t have to get to a fire!