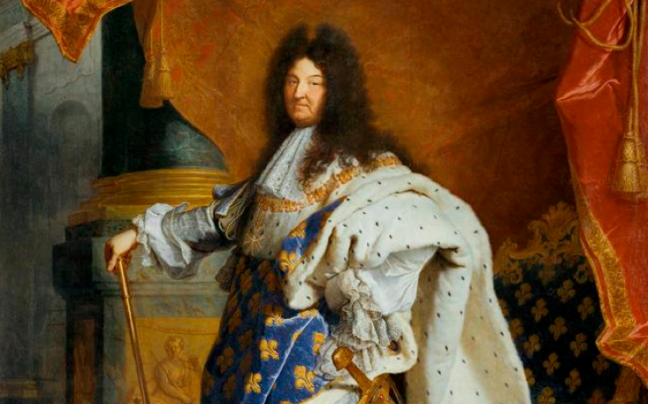 Detail from a 1701 portrait of Louis XIV by Hyacinthe Rigaud

It’s time for yet another “franecdote” — an interesting fact or story from “THAT year in French history“ where “THAT year” is this year minus the number of Facebook fans je parle américain has every Thursday.

Today’s franecdote is from July 11, when je parle américain had 328 Facebook fans. So …

The Edict of Fontainebleau

Students of French history probably know what the Edict of Fontainebleau was; others — if they know French history at all — probably know it more for what it did than for its name. The Edict of Fontainebleau was, in fact, the revocation of the Edict of Nantes. The famous Edict of Nantes was the 1598 royal decree by France’s King Henry IV, granting religious tolerance to French Protestants, also known as Huguenots. Henry himself was the Protestant King of Navarre before acceding to the French throne, but he reconverted to Catholicism in order to do so, famously stating that “Paris vaut bien une messe” (“Paris is well worth a mass”). Now, I could write for pages about this fascinating historical background: the wars of religion in France during the 16th century, the St. Bartholomew’s Day Massacre, Isabelle Adjani’s and Daniel Auteuil’s performances in La Reine Margot, the assassination of Good King Henry IV by a Catholic extremist in 1610 — but that would slow us down considerably, so … suffice it to say that the Edict of Nantes was crucially important in ushering in a period of relative peace and prosperity in France, during which France’s almost one million Protestants were relatively free to practice their faith and lead productive lives. Enter Henry’s grandson …

While the Huguenots were never completely equal with Catholics in 17th-century France, the Edict of Nantes did accord them substantial civil rights. Those rights, however, were at the whim of the King, and when Louis XIV began to see religious pluralism as an impediment to the centralization of his power as an autocrat, the die was cast. Beginning in 1681, Louis began a campaign of intimidation against the Huguenots. Called “Les dragonnades,” the campaign forced Huguenot families to billet (or quarter in their homes) rowdy dragoons from the French Army. In essence, the dragoons were used as a domestic “security detail” to terrorize Huguenot families and thereby pressure them to convert or emigrate. This practice caused outrage in neighboring Protestant England, to which many Huguenots emigrated during those years.

In 1685, spurred on by his advisors and possibly by his second wife Françoise d’Aubigné, a former Huguenot and devout Catholic, Louis issued the Edict of Fontainebleau, ending the short French experiment with religious toleration. The practical and almost immediate effect was that the existing trickle of Protestant emigration became a veritable exodus. Huguenots fled to neighboring England, Switzerland, the Dutch Republic, Denmark, Sweden, Brandenburg-Prussia, and Protestant states in the Holy Roman Empire, as well as to such far-flung destinations as the Dutch Cape Colony in what is now South Africa and England’s colonies in North America. Louis himself bragged that of the 800,000 to 900,000 Huguenots in France in 1685, only a thousand remained in 1686. This is certainly a self-serving exaggeration, but the Edict was responsible for a “brain drain,” in which at least half of France’s highly-skilled Huguenot population fled the country. The stringency of anti-Protestant policies varied in the years following the Edict, but it was not until Louis XVI signed the Edict of Versailles in 1787 (ratified in 1788) that  state-sanctioned religious persecution ended in France.

A personal aside: This is an interesting story for me because, as you might already know, one of my first ancestors born on American soil was the son of two Huguenot immigrants to the Carolina colony: Isaac Dubosc (transcribed as “Dubose”) and Susanne Couillandeau. They arrived in Charles Towne some time between 1685 and 1687 and formed part of a historically important Huguenot community in that nascent English colony. You can read more about that in this article.