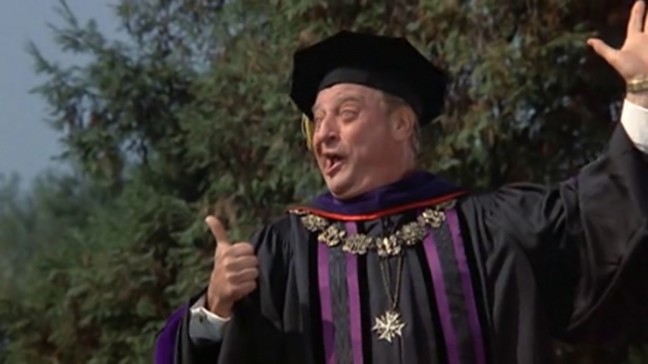 Rodney Dangerfield, in Back to School

Today, I went back to school.

“Wait a minute. You’re still taking French classes?” you’re surely asking in utter disbelief. “Shouldn’t you be fluent by now?” Well, no and yes … kind of. I’m done learning French. I’m not fluent, but there are only so many times you can take the same course over and over to “ameliorate your competence” before you get the side-eye. Now, I’m going to Université Paris Descartes to earn my licence. “Licence? What’s that? It sounds like either (1) what you need to drive in France or (2) what you need to practice law there.” Well, no, it’s neither that mundane nor that prestigious. It’s a bachelor’s degree …

I know, I know. You’re probably very confused right now, so let me explain why a 41-year-old lawyer is going back to undergraduate school in Paris. In a nutshell: Earlier this year, I had to find a reason to renew my visa this year. I didn’t know if marriage equality would pass in time to give me the right to a family visa. I still didn’t have a job. I had maxed out the French language school option, so the only educational avenue still available to me was a real French university. Now, since I didn’t want to continue with any of the subjects I’d previously studied, a master’s degree (not to mention a doctorate) from a French university was simply out of the question. Since I’ve wanted to delve into linguistics ever since becoming an armchair etymologist, the answer was simple: it was to be a licence en sciences du langage for me … and it was to be cheap: 185€ a year — yes, that’s $250 for an entire year! At that price, what’s to lose?

Now with that background, let’s return to my very first foray into a French university. On the agenda for my first day:

When I got to my classroom about half an hour early, I discovered that the door was locked. “No worries,” I thought. “I’m pretty early.” When I came back twenty minutes later, though, it was still locked and I learned that all the students sitting on the floor in the hallway were waiting to get into another classroom. Now that was a tad worrisome. I headed to “the office” to find out what was going on. An exceptionally friendly administrator escorted to me to a bulletin board in the entry hall, where she showed me all the academic notices and explained that “PPE” (“What I Want To Do With My Life”) doesn’t start until next week. Turns out that neither does “METG.” (The course name I had seen posted outside a few classrooms that I subconsciously interpreted as “MEETING” actually means “How to Find a Book in the Library” — my afternoon class.) So, what had promised to be a six-hour school day had been reduced to just two. I thanked my savior for her help and apologized for being so lost. “Don’t worry!” she said with a smile. “You’re not the only one.”

What I did seem to be the only one of, though, was old. When I showed up a few hours later for Informatique (“How to Use an AZERTY Keyboard”), I found myself in a classroom with fifteen 19-year-old women who, just like me, had all selected this particular time slot for the course. “This professor must be a good-looking dude,” I thought in an uncharacteristically sexist/ageist lapse. Eventually, two young guys joined us, the operative word being “young.” Unlike most of my French classes, where there were always at least two or three other students my age, I was the only one in that room who remembered Madonna without her wrinkles photoshopped away. I wondered if any of my classmates might mistake me for the professor. When he did show up, I was gripped with the sudden realization that I was probably old enough to be his dad, too.

The class itself went well. Computer science isn’t really my thing, but it will be sort of fun to learn how to use Word, Excel, and Powerpoint and discuss the philosophy of modern communication and technology all in French. We’ve already been assigned a group project, too. We had to choose partners and I — viewing my Americanness as a possible impediment — offered myself as a partner to my neighbor, promising free English lessons if she would put up with my non-native French. She accepted “avec plaisir.” Whew!

As for tomorrow, I’ll start my day with linguistics for three hours — Yay! The subject I actually want to learn! — followed by “Discoveries in Social Science” for two hours, then English for two hours. “English?!” Yes, English. You see, everyone in linguistics at Paris Descartes has to achieve a B2 (upper intermediate) level in English by the end of the program, me included. But, yeah, I think I’ve got that one covered. In fact, when I told the lady who helped me this morning that English was my native language, she asked if I was taking it for just for fun. I said I wanted to talk with the professor tomorrow to see if I should just test out of it, or if she thought I might find value in being in an English class taught to French students. After all, if that’s what I want to do here in France, you couldn’t find a better opportunity for classroom observation! We’ll see how it all goes as the semester progresses … and whether anyone does ask me if I’m the professor!