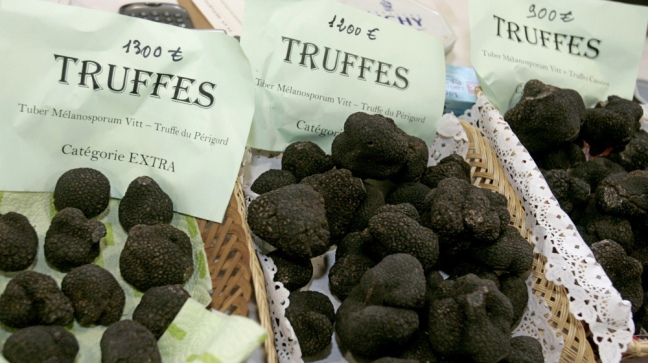 For the last post before my CELTA English teaching course begins Monday, I thought I’d write about a few relevant “French English” words : student, study, review, professor. Then a friend shared an interesting article with me, and I decided to go with truffle instead—probably more engaging and certainly more enticing than a discussion about homework!

Truffle has two very distinct meanings in English, of course. It can refer to the very tasty and very expensive mushroom that grows in forests between the leaf litter and the soil and gets sniffed out by special truffle-hunting pigs and dogs. If you have a sweet tooth like me, though, the word probably initially conjures up images of those decadent little chocolate confections.

The word truffle (or “truffe” in Modern French) comes from the Old French “trufe” by way of the Old Provençal “trufa,” which itself comes from the Vulgar Latin “tufera“—a dialectal variant of the Latin “tuber,” meaning “lump.”

When you look at a truffle of the fungal variety, you can certainly see why it takes its name from the Latin word for lump. It’s definitely not a pretty thing, but the taste … well, it’s simply amazing. There is a reason, after all, why the black Périgord sells for as much as $800 a pound and the white variety sells for as much as $2,000 a pound!

The truffle, in its many varieties, has been known as a foodstuff since ancient times. The white variety was popular among the Romans, but the truffle fell out of favor during the Middle Ages. When Europeans abandoned the use of overpowering seasonings in their cuisine during the Renaissance and rediscovered the natural flavors of their foodstuffs, the truffle made a resurgence. The court of King François I was especially known for indulging in truffles during the 16th century and, by the 19th century, truffles had become widely popular in French cooking. France is best known for the cultivation of black truffles and Italy is best known for the white ones, but that’s not to say that connoisseurs of the truffle haven’t tried to cultivate them closer to home. There is, in fact, substantial black truffle production in Spain, Croatia, Slovenia, and even Australia and New Zealand. Even farmers in the Appalachian Mountains of Tennessee and North Carolina are now experimenting with cultivation there. Maybe my folks back in South Carolina will soon be able to find some homegrown Périgords down at the Piggly Wiggly? One can hope.

So, that brings us to the sweeter and more affordable variety of truffle. The original chocolate truffle was created in Chambéry, France in 1895 by chocolatier Louis Dufour. Now, one might think that the chocolate truffle would have a much longer history than that in a country so known for its decadent desserts. As a matter of fact, just eating chocolate, as opposed to drinking a brew made from the beans, wasn’t even a possibility before the invention of the chocolate press at the end of the 18th century. This device separated cocoa butter from solid cocoa, which was then ground into powder. The Dutch subsequently invented a method of treating the cocoa powder with alkali to remove its bitterness. Very quickly, innovators all over Europe experimented with chocolate recipes, adding various combinations of sugar and milk to the cocoa, but it wasn’t until 1847 that the English company J.S. Fry & Sons succeeded in making a “moldable” chocolate paste by adding back some of the cocoa butter.

Some fifty years later, Dufour came along and decided to mold little confections from ganache (semi-sweet chocolate mixed with heavy cream) and dust them with cocoa powder. Dufour’s first creations were irregular in shape—not at all the perfect little globes we usually find in today’s chocolate shops—and the form reminded him of the dark, dusty, lumpy Périgord truffle, so that’s the name he chose for them. Dufour’s original truffle has undergone myriad transformations since 1895; today’s truffles can be filled with everything from ganache to caramel to liqueur, and they can be decorated with everything from cocoa powder to sea salt to coconut. While they may not look much like the lumpy mushroom that inspired their name, these homonyms still have one thing in common: they are both symbols of exquisite taste.

So, whether you’re planning to indulge in truffles of the savory or sweet variety, allow me to say …

In English, “truffle” has only two meanings. In French, however, the word “truffe” can also refer to the nose of a dog. When you think about it, it makes sense. That dog’s snout does look a lot a Périgord truffle, doesn’t it? And speaking of dogs, chocolate truffles are not only called “truffes” in French, but they’re also called “crottes,” meaning … well, let’s just say that a “crotte” is what your dog leaves behind as a calling card and what you get fined for leaving on the sidewalk … everywhere, that is, except for Paris!