We have an expression to describe something that’s quintessentially American: “as American as apple pie.” The truth be told, though, apple pie isn’t all that American; they have apple pies in every culture where folks grow apples, and the French themselves make some pretty amazing variations of this “American” dessert. On the other hand, it’s pretty difficult to find a dessert more American than carrot cake. Even though it’s known here in France, it still has an air of mystery about it. It’s not at all easy to find, except in some American bakeries (like my favorite, Sugarplum) and at Starbucks (although I don’t recommend a mass-produced carrot cake that’s been deep-frozen, shipped from who knows what cake factory, and then thawed out in a display case).

If you’ve been following my story here on je parle américain, you probably remember that last summer, when Michel and I were babysitting our niece and nephew in Metz, we introduced the kids to this dessert that had recently become a favorite of their Tonton Miko (that’s Michel). The kids had a great afternoon helping us mix the cake but, when it was finally out of the oven and iced with homemade cream cheese icing, they refused to even taste it. A cake with CARROTS in it? Yeah. Not so popular with the four- to seven-year-old crowd. It wasn’t half bad for a recipe from the internet, but it wasn’t a great success either — even with the adults.

One year later, Michel has become quite the amateur baker. Back in June, you see, he got an oven for his birthday and, since then, he’s been trying his hand at various cakes, pies, and tarts. He’s gotten really good at it, too, which is one of the reasons I ended up putting myself on a diet in July. He could make a crusty pain de campagne, a scrumptious moelleux au chocolat, and a decadent lemon-speculoos cheesecake, but what was missing from his repertoire were the recipes he could learn in only one place: the kitchen of Maman Bell. So, when we were back in South Carolina at the end of August, Michel got in the kitchen beside my mom, learning her secrets, taking photos and copious notes, and trying his hand at various recipes. He learned how to make her cheddar, cream cheese, and Colby-Jack mac ‘n’ cheese, her now world-famous buttermilk biscuits, and the pièce de résistance: her carrot cake.

So, not long after our return to France last month, Michel received a special request from his sister: she wanted a carrot cake — a real carrot cake — for her birthday. And Sunday afternoon, that’s exactly what she got: 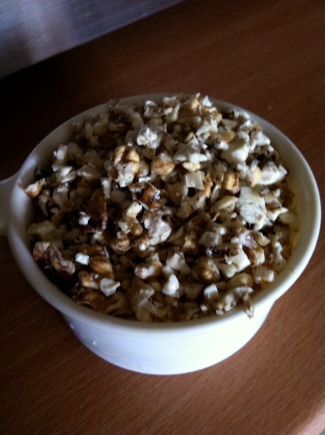 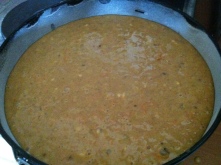 (Yes. French people learn English best by eating Philadelphia cream cheese. The inverse is true for learning French. Just eat Boursin everyday and you’ll be fluent in no time! How do you think I did it?)

When the time crunch hit Sunday morning, though, making that icing from scratch wasn’t an option any longer. Michel decided to use the Pillsbury icing we’d brought back in our luggage.

It was the first taste of carrot cake for everyone at the table, except for Michel, his sister who had sampled our less than stellar experiment last summer, and me. That made ten virgin palates for this cross-cultural taste test. The reactions were pretty much what I expected:

There’s a little too much cinnamon, I think.

(Note to self: The French don’t like cinnamon quite as much as we do.)

All in all, it was a real success, and Michel can be quite proud of his very first carrot cake using my mom’s recipe. I’m just hoping he doesn’t make another one anytime soon. At 400 calories a slice, my waistline can’t afford to have one sitting around our kitchen!

Next up: Red velvet cake — to bring a little more Southern charm into our Franco-American culinary exchange. Sounds like a Valentine’s Day post to me … that, or my groom’s cake when marriage equality passes here next year.

P.S. — For anyone who’s interested in trying my mama’s recipe (instead of the one from the internet we used last summer), here it is:

Mix the sugar, oil, and applesauce in a large mixing bowl. Beat in one egg at a time. Mix in the shredded carrots and chopped walnuts. Sift the flour and measure out 3 cups. Resift the flour with the spices. Beat into the batter 1/4 of the dry mix at a time. Pour the batter into two greased, floured cake pans and bake for 45 to 50 minutes at 350ºF (approx. 175ºC). Let the layers cool on a cooling rack. If possible, wrap the cooled layers in cellophane and place in the refrigerator overnight.

Beat the butter and cream cheese until fluffy. Beat in the powdered sugar until the mixture has the right consistency. Mix in the vanilla extract.

Place one layer of cake on a cake plate and ice. Top with the second layer and ice, including the sides of the cake. Garnish with additional chopped walnuts or walnut halves. Slice and enjoy. Like many cakes, this cake is even better a few days after baking.