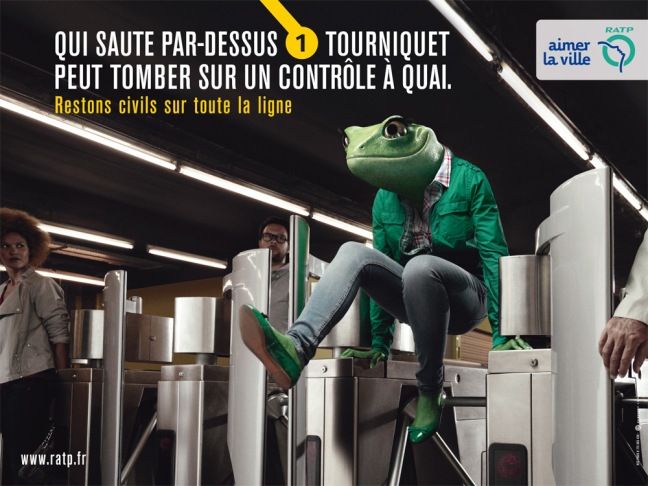 I complain a good bit about the Paris Métro: despite its art nouveau charm, it’s often a crowded, noisy, and filthy experience. I usually don’t give the RATP (the company that operates the transit system) much credit either, but I have to tip my hat to the recently launched third generation of its “civility” campaign, “Restons civils sur toute la ligne” (“Let’s stay civil on the whole line”). Like earlier “seasons,” the campaign uses clever little “proverbs” and animal characters to remind passengers how to conduct themselves in the Métro … and the subtle nod to the fables of La Fontaine is so, so apropos for a French audience. The ads also integrate graphics representing transit lines into the proverbs. Only time will tell if the campaign will have any real impact on the daily transit experience, but until it does, we can at least enjoy the ads …

My favorite from the current campaign: the tortoise …

Another ad from this season: the “inseparable” lovebirds …

You can see more images from the first and second seasons of the campaign in the gallery below:
To open the gallery, simply click on one of the photos below (or on a white space if nothing appears). You will then be able then scroll through all of the photos in a larger format.

“He who lounges around at rush hour risks two or three complaints.” © RATP

“He who throws chewing gum in the trash will have less of it on the soles of his shoes.” © RATP 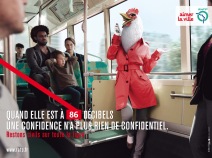 “When it’s at 86 decibels, a secret has nothing secret left.” © RATP

“He who jumps a turnstile can end up getting checked on the platform.” © RATP

“He who shoves five people to get on won’t leave any faster for it.” © RATP

“He who soils a seat in going risks getting stained coming back.” © RATP

“Blocking the two doors at departure makes all the passengers late.” © RATP

•
In addition to the big ads you see on the Métro billboards, there are also smaller announcements that appear inside the trains and in other venues:

Not surprisingly, this clever campaign has engendered a hilarious satirical response, which you can check out here: “Restons débiles sur toute la ligne” (“Let’s stay stupid on the whole line”). Here’s a little sample for you:

Welcome aboard, ladies and gentlemen. Enjoy the ride …